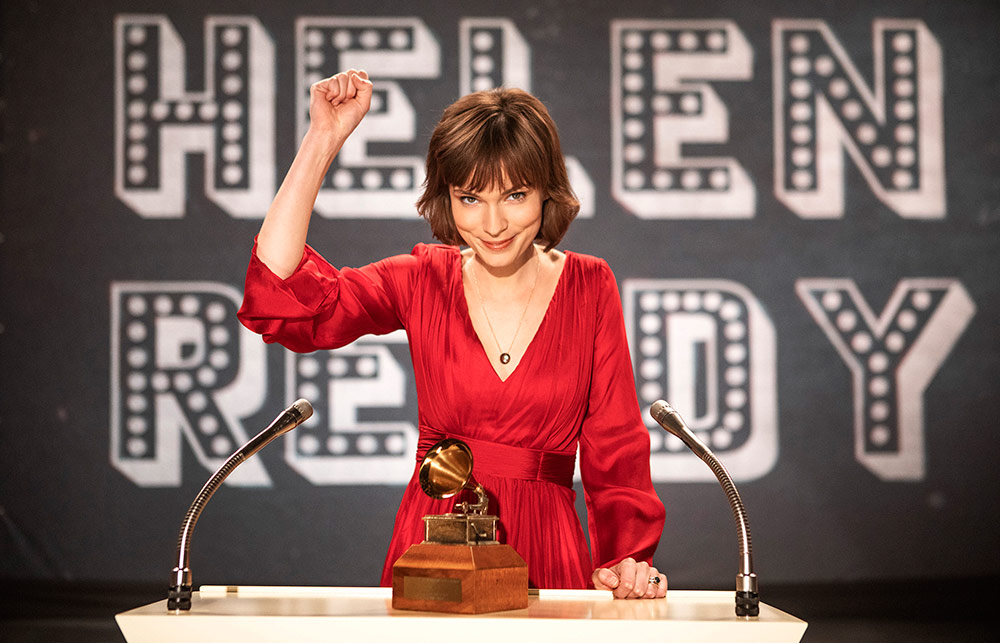 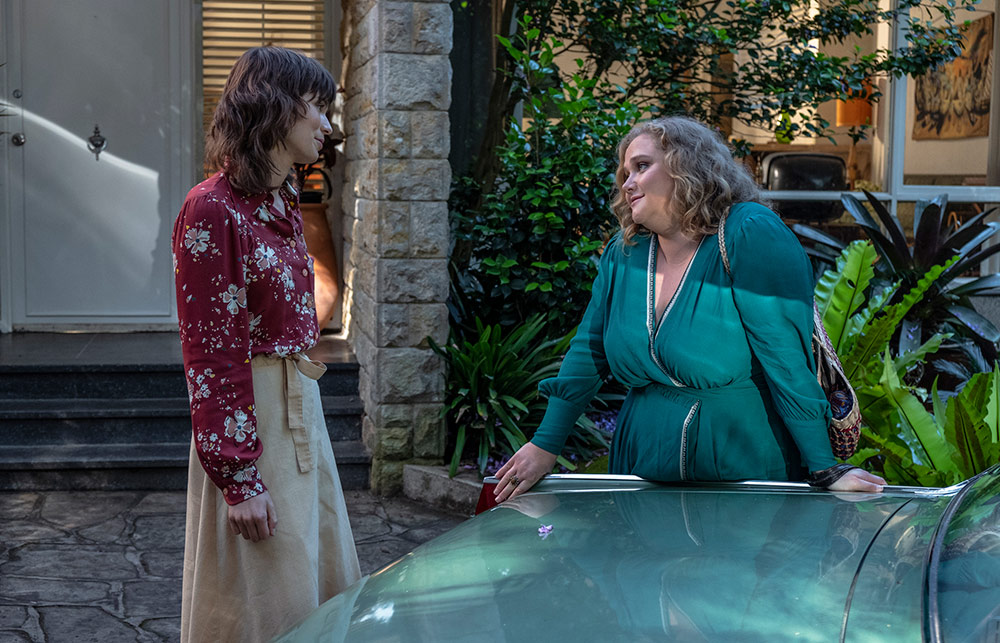 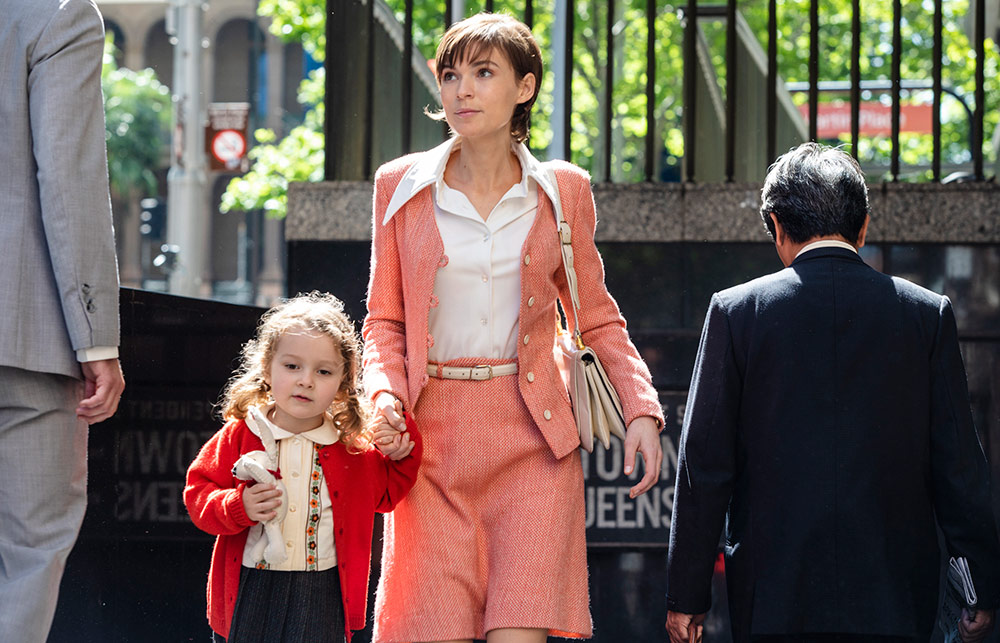 Helen Reddy’s “I Am Woman” was the unofficial anthem of the women’s liberation movement in the 1970s. It was a chart-topping hit that earned the singer a Best Pop Vocal Performance, Female Grammy award in 1972.

Now the song and Reddy’s story are at the center of a new biopic, I Am Woman, which will be available to watch via video on demand Sept. 11. Directed by Unjoo Moon, the film stars Tilda Cobham-Hervey as the singer, Evan Peters (American Horror Story) as Reddy’s former husband and manager Jeff Wald, and Danielle Macdonald (Patti Cake$, Dumplin’) as Reddy’s friend, journalist Lillian Roxon.

“It’s such an extraordinary story. I was just so shocked that a movie hadn’t been made about her,” Cobham-Hervey tells Fortune. “Before I read the script, I knew the song ‘I Am Woman’; I knew the name Helen Reddy, but I did not know much about her life.”

Cobham-Hervey, who only met Reddy toward the end of filming, researched the singer by reading her autobiography The Woman I Am, looking up materials online, and watching old interviews and performances. She also worked with voice and movement coaches to make sure she captured the right energy while portraying Reddy on film, even taking a lesson with a breathing coach “to breathe like a singer.”

“I sang live on the day, even though my [singing] voice isn’t in the film,” she explains.

Though Cobham-Hervey is Australian, just like the singer, imitating Reddy’s speech patterns wasn’t the easiest task.

“She has such a particular accent of that time and such particular rhythm to her voice that in some ways, that was very challenging,” she says. “It really felt like doing an accent even though we’re both Australian.”

Moon, who had spent time with Reddy in previous years, also served as something of a resource to the actors.

“I spent a lot of time with Helen even before we started writing the script,” says Moon, adding that they’d go for walks, get lunch together, and that she was able to join Reddy during something of a revival tour. Once the scriptwriting process began, Reddy and her family left it to the filmmakers.

“I was really able to let her know that I wasn’t going to be making a documentary,” Moon says. “But I did say to her, ‘Helen, I absolutely promise you that I will honor the spirit of who you are, the life that you have, and the impact that your music has had on people.’”

The film details Reddy’s move to the U.S. as a single mother in the 1960s, the struggles she encountered before recording her hit tune and becoming a star, and the volatile relationship she had with Wald. It also depicts her friendship with Roxon, a fellow Australian living stateside and the writer of the groundbreaking Lillian Roxon’s Rock Encyclopedia, which was published in 1969. Cobham-Hervey describes the friendship as “the other love story” in the movie, saying that doing the scenes involving the two women was a “lovely part of the filmmaking experience.”

Macdonald, who happens to live with two of her “best girlfriends”—which she describes as a lucky situation amid pandemic-related lockdowns and quarantines—feels the same way.

“I love that we get to see how impactful friendships are on-screen and what it does for us, and how we learn and grow from them,” she says.

For Macdonald, playing Roxon was something of a departure from her other roles, even though those parts have also involved portraying strong female characters.

“She’s a little older, so she kind of just seems to have it a little bit more figured out,” Macdonald says, adding that other characters she’s played often seem to be on a journey of growth. “With Lillian—she has it in spades. She was confident, she was outspoken, she was kind of the queen of the underground New York rock music scene.

“She really just kind of owned it, owned herself, knew herself,” she continues. “And that was fun to play and also kind of scary to play because I still feel like I’m trying to figure it out. Lillian just seems like she knows it all, and I’m like, ‘I’m still not there yet.’ But it was fun to bring that out and just relax into it.”

Though the film follows a significant period of Reddy’s life in the U.S., it is very much an Australian production through and through—and was filmed in Australia as well, with the exception of a couple of days in Los Angeles.

Moon has lived in the U.S. herself, and other members of the filmmaking team had also spent time there and grown familiar with particular architecture and settings, so they were ultimately able to find ways to re-create previous eras of the U.S., as well as certain cities.

“We pretty much shot through all the streets and suburbs of Sydney, Australia, to re-create America. It’s interesting because a lot of Americans have no idea we shot in Australia,” Moon says, adding that one major obstacle—though the crew found ways to cut around them—involved Australian birds. “I mean that was super annoying. Because you’re supposed to be in Los Angeles and suddenly you’ve got a kookaburra in the background.”

Making the movie in Australia was something of a treat for Macdonald, who has been living in the U.S. and working on American productions. “My America and my Australia collided,” she says, while mentioning that her American friends visited her while she was on set in Australia. “I’m only used to filming in the States. So this is the first time filming at home, and my family was on set. It really felt like a melding of my two worlds—life was imitating art there for sure, and it felt special.”

Moon describes Reddy’s story as “quintessentially Australian,” pointing to Australians who leave home and go to Hollywood with big dreams. “She was the first and paved the way,” Moon says.

It’s also a story that has relevance to women today, the actors say.

“I think it’s a really important thing to just look back at the women that came before us and celebrate all that they did,” says Cobham-Hervey. “I don’t think that we’d have things like the Me Too movement and the Time’s Up movement if it wasn’t for people like Helen who fought for things that have made my life possible, the way it is today.”

“I hope that people get that feeling out of it.”

I Am Woman is available to watch on VOD starting Sept. 11.