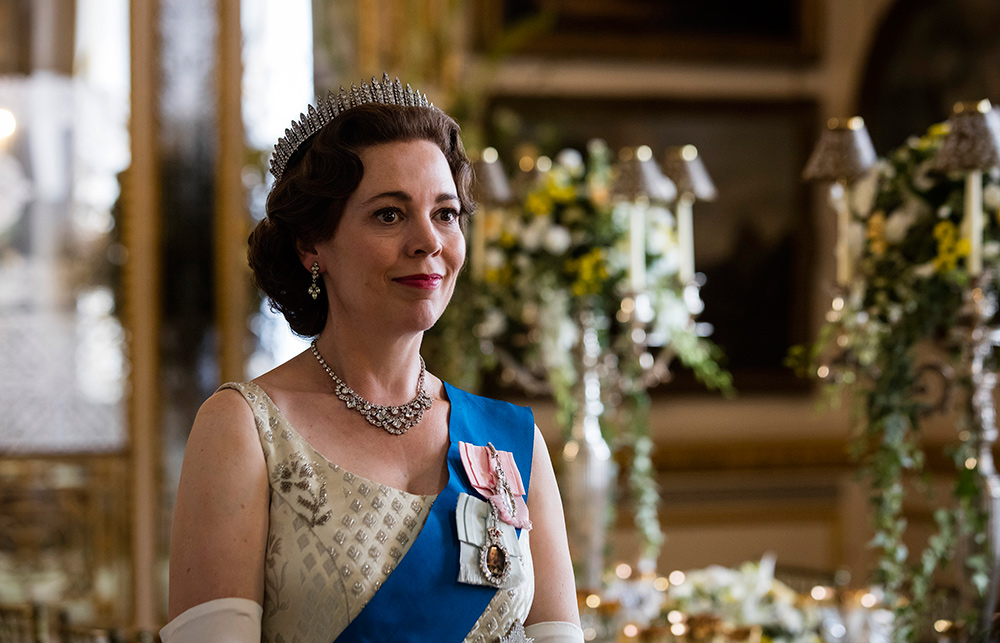 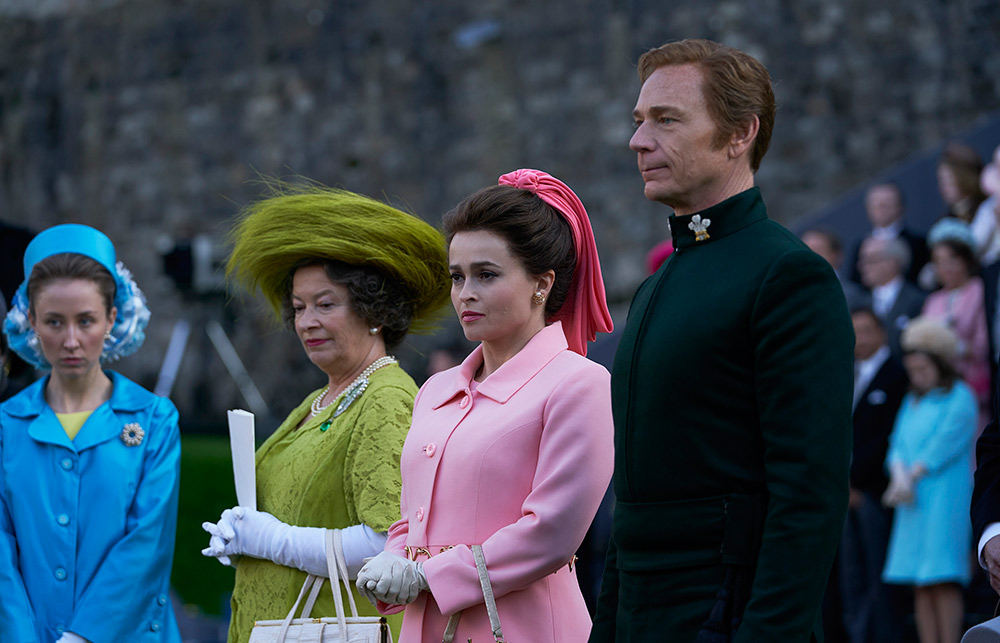 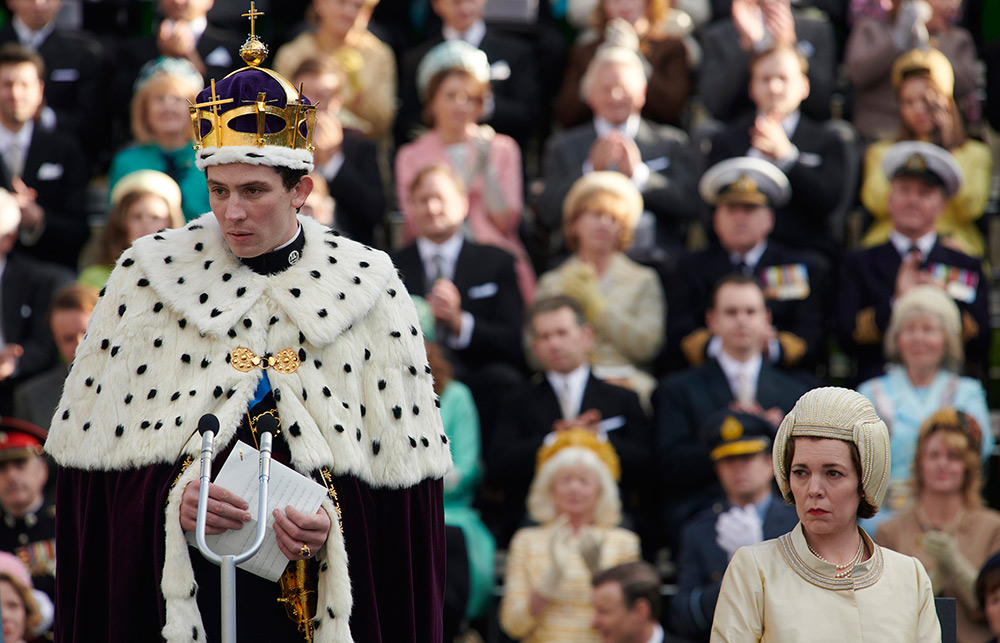 Netflix’s The Crown caught the eye of critics and audiences alike when its first season premiered in 2016. Lavish sets and costumes, a notable cast, and stately music are all part of the drama series, which chronicles the life of Queen Elizabeth II, starting in the 1940s.

With a new season on its way in November, the series continues to draw accolades; its third season is nominated for various Emmy Awards this year, including in the production design and period costume categories. As one would expect, costuming and coming up with the overall look of such a vast production involves a good amount of research, as well as some very specific processes, according to Fortune’s conversations with production designer Martin Childs and season three costume designer Amy Roberts.

Childs, who has worked on the series from the beginning, says he developed a system after the first season that involves sketching the main location where most of an episode takes place—such as Buckingham Palace or Windsor Castle—at the center of a sheet of paper. Then he draws in some arrows and additional information around that. It’s gotten to a point where “almost everybody wants a copy now. It’s like looking at the script in a one-page guideline,” he says.

“The way that helps me is to know when something in the narrative follows something else,” Childs says, adding that it helps him decide when to avoid using things like the same colors or window arrangements from scene-to-scene—visual cues that help the audience understand the story is moving along.

Extensive research is involved in creating the sets—making well-known areas of Buckingham Palace, for instance, as accurate as possible is important; Childs toured the royal residence ahead of season one. But there are also parts of the set, such as the royal family’s private apartments—which there are no public records of—that are built using what Childs refers to as “informed imagination.”

“I have to say that absolutely nothing in The Crown is [an exact] replica of the real thing,” Childs says, though the style of the sets remains true to the spirit of the real location.

There are probably about 400 different sets used each season, according to Childs. Repeating some of them throughout the seasons, especially as the cast changed (the Queen is portrayed by Claire Foy in the first two seasons, while Olivia Colman took over the role in the third and fourth seasons), helps serve as a visual reminder that audiences are still watching the same characters on the same show.

The use of such sets doesn’t mean the show doesn’t also shoot in different locations, both in the U.K. and abroad, though. Some locations wind up substituting for others onscreen. In the early seasons, South Africa stood in for roughly 70% of the show’s foreign settings, Childs says.

“But season three, we kind of almost exhausted—unbelievably—our South Africa locations,” says Childs, so the production wound up shooting some scenes in “a little triangle of Spain” instead. This region ended up standing in for places such as California, Arizona, and the Caribbean. The cast and crew also returned to Spain to re-create various locations for the upcoming fourth season.

For her part, Roberts also does a tremendous amount of research when designing costumes, immersing herself in photos, books, and films featuring members of the royal family. But then she eventually “throws it all away.”

“We’re not doing a documentary—it’s a drama,” she explains.

Season three, which plunges viewers into the ’60s and ’70s, was exciting for Roberts to work on because of “those extraordinary beautiful, punchy colors that the royal women really seemed to relish.”

While the Queen is generally known for wearing bright colors, even today, that particular period featured what Roberts calls “sugared almond” colors like pinks and lilacs, which allowed the costuming department to jump in “bravely and boldly” to depict a new era.

The most recent season also saw the differences between the various royal generations highlighted more clearly. The Queen Mum’s clothing still has hints of a 1930s silhouette, while Princess Margaret and Queen Elizabeth are in ’60s silhouettes like A-lines, albeit with an element of modesty. Princess Anne, on the other hand, actually sports some miniskirts.

“Again, not outrageous miniskirts—you know, like a couple of inches above her knees, not crazy,” Roberts says.

The most challenging project for Roberts involved Prince Charles’s investiture—the ceremony that formalized his status as Prince of Wales. The crown he wears in those scenes was especially made for the series, while the robe in particular posed something of an ethical challenge.

“That all had to be made, and we quite rightly don’t use fresh fur, so all the lining is ermine, and so we had to source an awful lot of approved ermine,” Roberts says.

Separately, Roberts’s favorite piece to work on was Princess Alice’s nun’s costume. “You’ve got all silks and the florals and the razzmatazz, and suddenly you’ve got this extraordinary character that is Prince Philip’s mother, and simple and honest,” she says. “We had to re-create that from absolute scratch…I had it worn and patched and darned.”

On the production design end, re-creating the Aberfan disaster—establishing a tragedy that did not involve the royal family—was a big challenge, though Childs is proud of what was ultimately accomplished from a storytelling perspective.

“It was a real part of history and a terrible thing that happened to real people, some of whom are still alive and remember it—I was around when it happened,” says Childs. “The responsibility of telling that story well and accurately was like nothing else on The Crown so far.”

“Our responsibility was to show the world that this appalling thing was happening,” he adds.

Communicating with other departments is key when it comes to making The Crown. Childs worked closely with Roberts to coordinate what colors should be established in a scene and often makes sketches for the visual effects team to convey what he wants.

“My preference is to never have too much VFX in any one shot,” Childs says, adding that he prefers that at least two-thirds of what’s seen on the screen is real. “Our VFX people were more than willing to go along with that. Their mission is to make what they do look like part of the set.”

With more seasons to come, the behind-the-scenes team still has some tricks up their sleeves.

Childs, who has been pacing himself as the series progresses, explains that his approach to a series like The Crown, which he compares to an “epic novel,” has to differ from how he treats a two-hour feature film.

“I’ve got to save up a few things. I can’t use all my best ideas in the first two hours, because in a feature film, it would be only two hours. In The Crown, you’ve got another 48 to go,” he says.

The Crown is nominated for 13 Emmy Awards this year. The series, which has received a total of 39 nominations since its premiere, has won eight Emmys up until now.