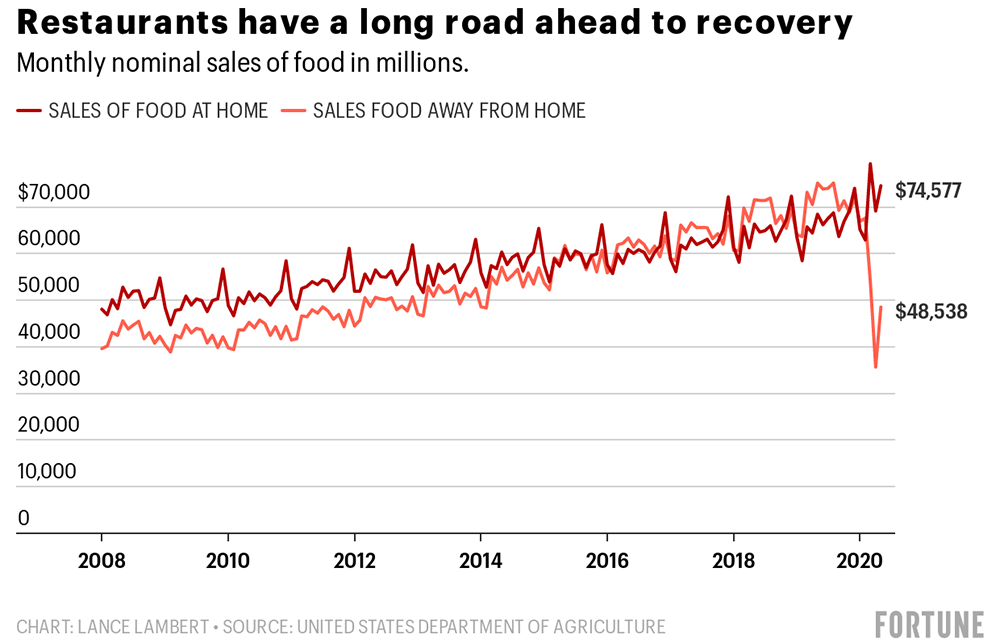 In the last few decades, eating out has steadily become a staple of the American diet.

In fact, it's become so core to our consumption habits that in 2014, the amount Americans spent on food eaten away from home—think restaurants or even lunch in school cafeterias—surpassed for the first time what U.S. consumers spent on food purchased at locations like supermarkets to be eaten at home.

Add that to the list of things that COVID-19 has thrown completely out of whack. In March, the USDA’s monthly sales of food figures showed that money spent on food away from home (FAFH) had dropped from $67.6 billion in February to $54 billion in March, a 20% decline, while sales of food at home (FAH) increased $62.9 billion to $79.3 billion, or 26%.

But the real shift came in April, when more states were in serious lockdown. Spending on food away from home plummeted 34% over the previous month to $35.7 billion. That's less than half of what Americans spent on FAFH in December 2019.

Today, the USDA reported May figures, which showed a bit of a rebound. FAFH was up to $48.5 billion.

It's still far too soon to get excited about any sort of recovery. May's FAFH figure is still some $20 billion below where spending was in January. There's clearly a long road ahead with many of the factors that have driven the current declines—working from home and kids out of school—still in play for the foreseeable future. And with COVID-19 cases surging in some states, it's highly possible that June and July figures could see renewed drops.

A consumer survey from Jefferies last month also suggests that some of the pandemic trends are here to stay. Its survey found that about 70% of respondents expect to cook more at home and about 80% expect to eat the same or more at home post-COVID as they did during COVID-19. Nearly half of those surveyed plan to eat at restaurants less post-COVID, while most said they are cooking at home more now and ordering delivery or takeout less than they were two weeks ago.

The trends are likely to be compounded by a worsening economic landscape. Take the Great Recession from 2007 to 2009, during which the downturn interrupted the historic growth of food away from home as unemployment rose.

The current change in eating patterns has implications that extend beyond just spending—many of which we don't yet fully understand. For example, food away from home is more caloric and has more saturated fats and sodium, according to the USDA. That means that a decline in FAFH could possibly result in healthier eating habits and better nutrition.

At this point what we do know for certain is that how we eat will never quite be the same.